My Submission for the Slasher Jam

A Trickster of Sleep and the Sandman's assassin who tortures their victims with a cackling grim and a pair of brain-rending claws!

The Mind-Jester Of Oak Road is a one page slasher-themed creature supplement for Mork Borg.

Art-wise, it's got a great retro Freddy Kreuger with a really strong presentation.

Gameplay-wise, the Mind Jester isn't terribly strong---although it's Mork Borg, so he can definitely do some harm if he picks off PCs one by one. He wins initiative by default, and he has moderate armor unless the party can pass a hard Presence to wake up. But he's very vulnerable to woken adventurers, and he doesn't have the kind of HP that lets him outlast a circle of PCs with decent melee weapons.

He does drop a potent weapon---which deals low damage but reliably knocks foes out---and this makes for a nice reward. It also might incentivize parties to hunt for him if they know he's in the game.

In terms of managing the Mind-Jester's difficulty, I'd suggest that GMs play up the PCs' difficulty in telling when they're asleep vs when they're awake, and use the Mind-Jester's control over their dreams to set traps and harry the party. Otherwise, if Freddy just sprints at a group of scvm, he's liable to end up spitted on the end of a zweihander. Which isn't terribly climactic, but might make for an interesting subversion?

Overall, I think this is a cool and memorable monster, and it's free. Definitely pick it up if you have the chance.

Ah bugger! Fixed! Thanks for letting me know. 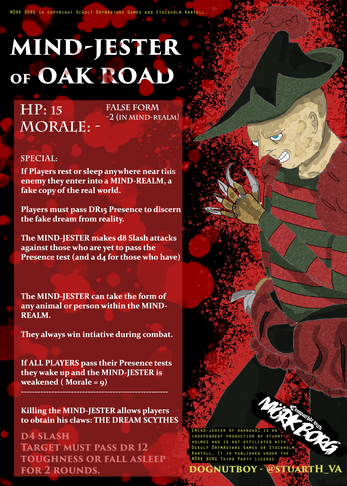